There’s a bit of bother surrounding the Queen and her bellend uncle Edward.

Doesn’t look good, does it? It’s not quite cricket, although the Queen is not in the docks over this. She was six years old. Her mother and uncle, however, are a different story.

Naturally, this scoop has prompted a bit of discussion. The Guardian have come out in defence of the Sun, which is possibly even more curious than the photo itself. The Sun reckon they’ve performed an actual feat of Journalism, which probably makes it the first they’ve managed this decade at least.

Thing is, I agree with them. This stuff is important. Many have seen this as an easy opportunity to attack the Sun for sensationalism, and lord knows they deserve it as often as it can be thrown at them. This time though, they’ve done something that has some value. It is important to put it into context.

The Queen’s age, the history of Edward, the relationship between the old blue blood of Europe and the rise of the Nazis. All of it very interesting stuff. Time for a history lesson.

The Queen’s family were part of a web of aristocratic, autocratic rulers with tentacles across Europe and beyond. From the time of Charles Martell, and later Charlemagne (Or Karl De Grosse, depending on what side of the French/German border you grew up on) Europe’s noble houses had been intermingling, marrying off their sons and daughters to each other much as royal families throughout history have been wont to do.

Charlie Big Dog, first Roman Emperor of Europe since the last ones.

The idea being to build alliances, secure dynasties and neutralise opposition. Naturally this led to some Ancient Egypt style complications, and despite what the portraits would have you believe most of these chaps were born with serious genetic problems. Fucking your cousins and sisters over an extended period of time leads to things like impotence, difficulty conceiving, fucked up mutant children and kings and queens who looked like this:

After the execution of Charles I, England became the first state in Europe to have it’s first and only proper, modern revolution. Cromwell won the civil war, fucked Parliament about and was reluctantly declared Lord Protector. After his son proved to be nowhere near as ballsy, Parliament decided they’d had their fun and had won enough concessions, and that England didn’t particularly work without a Monarch even though they had no intention of handing over real power.

The next few Monarchs had a problem securing legitimate heirs that Parliament grokked. Eventually a second, more benign revolution (at least for the English, anyway) gave way-The Glorious Revolution-and we imported William of Orange and his wife Mary, to rule together as joint Monarchs. William and Mary were too busy fucking up Ireland and being big fat protestants to bother to get with the makey-make, so when they died off Mary’s sister Anne took over. She too was awful at stopping her children from dying (she had 17 miscarriages/stillborn/sickly to death young’ins), so the tenuous English/Scots line died out.

Parliament still wanted a King. They brought in George of the House of Hanover, a proper teutonic dandy who ruled over a Duchy in what is now Germany. See there were absolutely loads of countries/states in what we now think of as Germany, most of them divvied up according who who was fucking which cousin. George had another George (the last fully card carrying German king of England and Scotland and Wales), who had another George. George 3: The Georgening is the one who famously went start raving bonkers and used to take governmental advice from a tree in his garden.

From the famous film, King George is a Looney

He had another George, and a William. George mark 4 was a right wrongun, spending his time following the accession to the throne getting fucked up on Laudanum (known to you and I as smack, horse, skag, the crazy world of Arthur Brown). He had one child legitimate child, who died, leaving the throne to his brother William. William was another wrong’un, and he too left no kids that the hoity-toity types felt comfortable sticking a crown on. You see, it didn’t count unless you came from a line of fucked up, inbred mental Germans.

The throne passed to Williams’ niece, a young lady named Victoria. Victoria’s mother was yet another imported German princess, who had married her imported German father. Victoria married-you guessed it-her German cousin, Albert. They had fucking loads of kids. Victoria was so good at carrying through with this pregnancy lark that she became known as the mother of Europe, her inbred kids doing backflips over family trees and marrying all the way to Russia. Victoria’s kids and grand kids became kings and consorts in Germany (now united, GULP), Russia, Belgium, all over. Name a posh twat on a throne and chances are at some point it was down to somebody crawling out of Victoria. This was a new house, the House of Saxe-Coburge-Gotha.

George V ended up having to formally change the name, because he’d found himself in a bit of a war with his cousins. In fact, at the funeral of George’s uncle Edward the future belligerents were all sitting amongst each other, calling each other pet names and imagining which fucked up mental future cousin they’d send their sons and daughters off to marry.

They settled on the House of Windsor, because it sounded English or something. When George died, the throne passed to his son, a total rotter who took the name William. If it’s not enough fucking your cousins until children are born inside out, the key to being a proper European monarch is to recycle names as though there are only a dozen to choose from. Edward was a shagger, and got himself in all kinds of bother with the upper classes and politicians and other royal families of Europe, because whilst the act itself was expected the publicity itself was becoming harder and harder to contain. Edward thought of himself as a modern type, had scant regard for traditions and loved fucking married women who compromised any semblance of hanging on to the idea of a divinely appointed ruler.

It came to a head when Edward decided he wanted to marry Wallace Simpson, an American divorcee socialite. It was decided by and large that such a thing was not cricket, and Edward created his own legend by abdicating the throne in favour of his brother, so that he could live the life of a dilletant with Simpson in Europe and beyond.

HITLER AND THE ROYAL FAMILIES OF EUROPE

I’ve already exhausted your patience, so I won’t go into what everyone knows. Hitler was a bastard, he connived his way to the chancellorship in the wake of the vacuum of hard power in Germany following the great depression.

At this time Fascism was incredibly fashionable with the elites of Europe. Paranoid ever since the French Revolution, and doubly so following the rise of the Communist party in Russia, many of the blue blood grandchildren and great grandchildren of Victoria saw Fascism as the logical vehicle to restore their former glory, disavowed by the masses following the advent of electricity, running water and the unimaginable upheaval of the first world war.

Everyone was to blame for the weakening of power of the Germanic cousin fuckers, except for the cousin fuckers themselves. It was merchants, bankers, foreigners (chortle), gays, the disabled, communists and proto communists BUT ESPECIALLY jews.

Hitler’s rise to power came on a wave of Europe wide anti-semitism. In Britain, Oswald Mosely and the Daily Mail’s owner lord Rothermere had a serious hard-on for Hitler’s bad boys. Britain too was weakened severely following the first World War, and Edward and his chums held onto a hope that possibly the changing tides on the mainland would eventually filter through to England, putting him at the head of a Fascist government supported by grand blue blood aristocratic bastards.

The Daily Mail, telling the truth for once.

Hitler was canny enough to make friends with the Germanic cousin fuckers of Europe. Whilst Hitler was a maniac, desperate for power and unwilling to cede anything to anybody else, he actually had a huge hard-on for old school German cousin fucking purity himself. His powerbases were often not the everyday, average Nazi party member but the former aristocrats looking to drag their family lines into the future. Naturally, he struck up a great friendship with Edward, and was sympathetic toward his designs on being a fascist leader in England. Various plots where struck up over the years, involving Mosely and Rothermere and others.

Nazi and Fascist bastardry was no secret. At the same time the Queen was heiling as a child in the gardens of Balmoral, Churchill was delivering speeches like this, having turned his invective from Communists and Indians towards a more immediate threat (and opportunity, for him at least)- Nazi Germany.

Much of the reaction today has been along the lines of ‘Well nobody knew then about the concentration camps and the evilness and just how much of an absolute parody the Nazis would become’. This is bollocks. People knew fine well what they were up to. People agreed. Not just in secret, but openly, at least up until the declaration of war against Nazi Germany. The old families of Europe, especially, sought to exploit fascism for what it is- a means of controlling the proles, while securing all the goodies for the land owning classes, and doing so with impunity. Much the same as it was back when they were at the height of their cousin fucking, except industrialised on a scale unimaginable to anybody except Mad George of the consulting tree.

THE QUEEN IS ALRIGHT THOUGH

But the Queen? The little one heiling to the camera? She done good. She didn’t expect to ever become Monarch. During the blitz, she drove firetrucks and ambulances around London. She lived through the war and set the tone of history in it’s wake, becoming one of the few non-bastards of her lineage. She’s lived through an unprecedented era of peace in Europe, and most importantly perhaps, made a big effort to stop her children and their children from fucking their German cousins.

EDWARD CONTINUED TO BE A BASTARD

After the war, Edward was resigned to just being an old racist, seething at his foppish racist reputation being superceded by the the Queen’s husband Prince Philip. Here he is with America’s arch bastard, Richard Nixon, looking exactly the same as all his cousins did and still do when they get old. 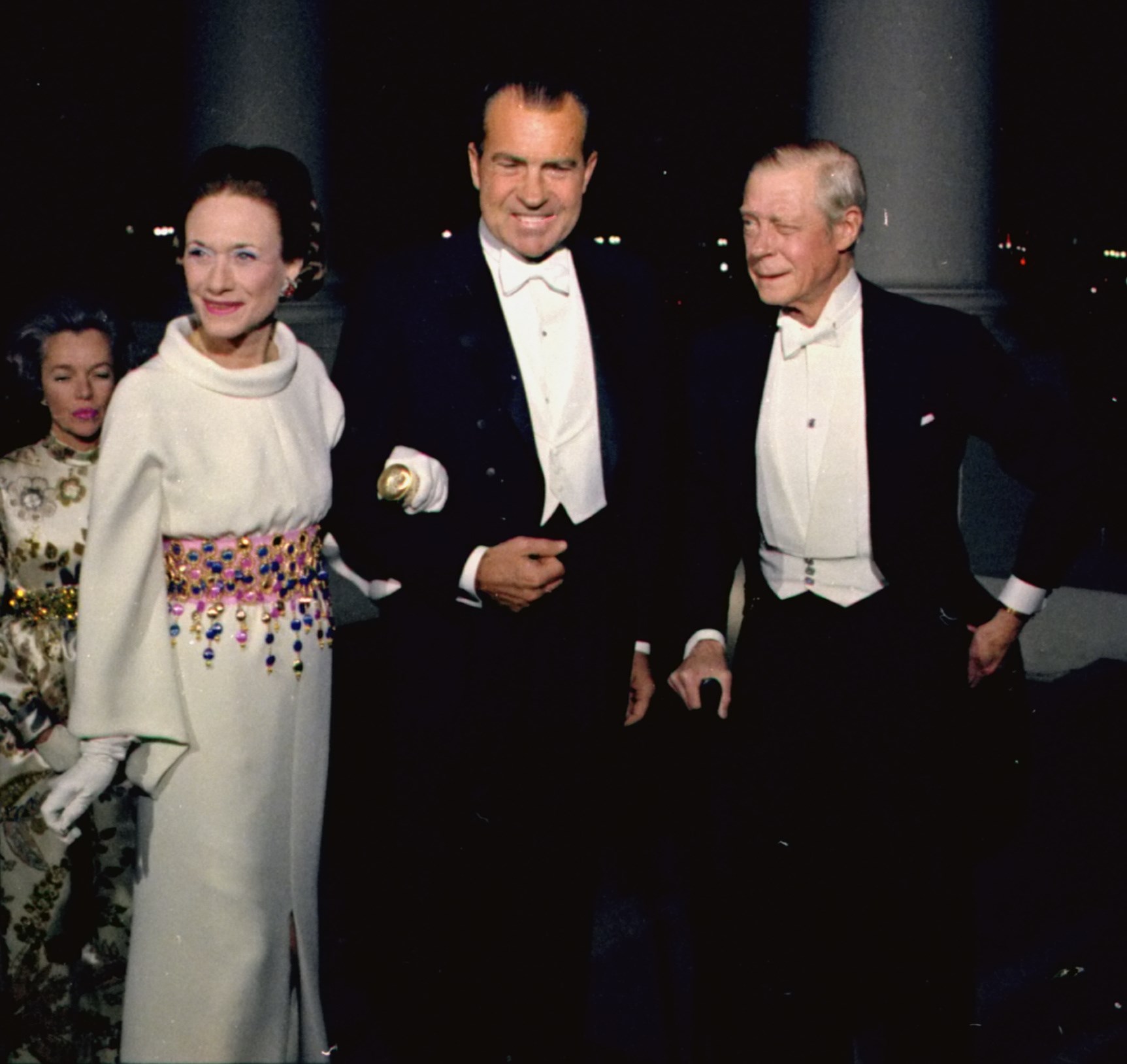